Jason and I get a little long winded this week, but that's ok, it's our last episode of 2014, so we've earned it!

Our guest this week is Joel Loukus from Apsis Motion Pictures.  Joel is the director of one of my favorite fan films of the year, Black Sands.  This short film is only 3:50 long, but it is original, well crafted, and obviously had a lot of thought put into it.  Please, give it a view before you listen to our conversation with Joel.


This week Jason and I also take a moment to reflect on Christmas's of Star Wars past, we give a shout out to one of our former guests, we cover the news and give you one last reminder about Jason's Jawa Giveaway!

News…
Empire Strikes Back Live Read -
Never Seen Before B Roll -
Nerdist ANOVOS Giveaway -
Natalie Portman on the Prequels -
Star Wars Christmas Lights -
How Fast Are The TIEs and Falcon in the TFA trailer? -


And, the Apsis short film "Jedai", another great one!

With the holiday season upon us, we’re doing something just a little bit different this week.  Our guest is David Bledsoe, a Star Wars fan who has started Collectors Care, a non-profit organization that collects toys for sick and disadvantages kids all year long, not just at this time of year.  Collectors Care doesn’t just collect Star Wars toys, but ya know what, since it is the season for giving, we thought we would break form for one week.  It is all for a great cause, so we felt that it was worth it!

Jason went to Denver, Colorado this week to speak with David in person.  They discuss the strong connection that Star Wars fans have with their toys, just how special such toys are to children, and how you can help get a new toy into the hands of a needy child.  They discuss the work Collectors Care does with the fan community, their appearances at conventions and the help that Collectors Care has received from some of your favorite celebrities.

This week we also answer a letter from a listener who had so much to say about the prequels, that we invited him on the show!  We briefly talk with film critic Joshua Starnes, and then talk to him even more on an episode of Scum & Villainy: The Expanded Fandomverse Aftershow.  What he has to say about the Prequels may make you rethink some of the accepted “truths” you hold about these films.

And as always, we discuss the news of the week (Character names! Poster rumors! Frank Oz returns!), and update you on the latest round of Jason’s Jawa Giveaway! (Utini!)  We’ve had some great Star Wars impressions sent to us, but we’re going to open up the contest a little further.  To enter, you can call us with our best (or worst) Star Wars impression, OR, you can post your favorite line from Star Wars below!  That simple!  Go ahead and do that and you will get your name in the running for our latest giveaway!

Posted by TheExpandedFandomverse at 7:08 AM No comments:

IT'S YOUR TURN TO WIN!

What do Nick Diak, Phil Souless, Steve Greenwood, and Chris Frank all have in common?  They have all been winners on Jason's Jawa Giveaway! (Utini!)

Now it's your turn to win!  This month, Jason is giving away a Qui-Gonn Jinn Epic Force action figure.  To get your name into our random drawing, all you have to do is give us a call and leave a voicemail with your best, or worst, Star Wars impression!

Let's hear you say your favorite line, or do that blaster sound you've been using since childhood, or roar like a sick Wookiee! You don't have to be great to win, the winner is randomly drawn from all who enter, so go for it and have fun!  You have until the end of the month to enter.  Why wait?  Call now! 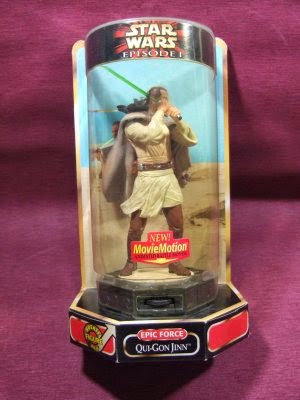 Posted by TheExpandedFandomverse at 11:30 AM No comments:

Surprise!  This weeks episode of The Expanded Fandomverse is here two days sooner than normally!

"Why are so early?" you ask?  Well, the guests we had lined up for the show this week just coincidentally ended up making news this weekend, and we wanted to capitalize on this moment.  We had planned to talk to Matt "Redeye" Paisley and Scott Will, the handlers of Roxy the Rancor, about their Kickstarter Campaign.  They were trying to raise funds to build a new shipping container-slash-cave for Roxy, the worlds only life sized Rancor.  Matt, Scott and their team were half way through their fundraising, when, on Saturday, they had to abruptly bring an end to the campaign.  Well, this news quickly made it's way around the Star Wars blogosphere.  We had plans to talk to them on Sunday, and since this was big news, we decided to drop our show today, on Monday, to help get their story out.  Matt and Scott said we were only the second people they've talked to so far about all this! So, even though we are not journalists, we are going to consider this the first (semi) exclusive "scoop" by The Expanded Fandomverse!

This weeks episode was going to be a special one, even before the news about Roxy broke.  This is our first episode with not one, but TWO guest segments!  This week we also welcome Austin Blankenship to the show.  Austin is one of the hosts of the great Star Wars podcast, Far Far Away Radio!  Austin is also the driving force behind the Star Wars Podcast Fan Awards.  We talk to Austin about his show, about the awards, and about how you the listener can get involved in the awards to vote for your favorite show!  -Which is The Expanded Fandomverse, right? ;-)

Also, I want to apologize to Austin.  When I listened to this episode, I realized that I called his show "Radio Far Far Away", and did so more than once too!  I'm very sorry Austin.  I had mynocks flying around inside my brain!

This week we also start the next round of Jason's Jawa Giveaway (Utini!).  To get in the running for an Epic Force Qui-Gon Jinn action figure, all you need to so is call us, and leave a voice mail with your best, or worst, Star Wars impression!  Call anytime, 205-383-3663.

Also this week, we put aside our normal "Etsy Item of the Week" segment to announce the opening of the OFFICIAL The Expanded Fandomverse Etsy Shop!  The shop will be up and running on Wednesday, December 10th.  Check back then to find the links to our our little store where you can purchase pendents with the Expanded Fandomverse logo!


And finally, this week we cover the news as alway, and for the first time we answer your letters on the show!  Yes, this truly is a super-sized episode!  Enjoy!

News…
Biggest Comic Book Ever? -
The Force Awakens Big Numbers -
Disney Is Making Big Money -
DisneyXD Has Biggest Month Ever Thanks To Rebels -
Rebels and the Bechdel Test -
Rebels Rumors -

Posted by TheExpandedFandomverse at 7:05 AM No comments:

EPISODE 018 - Matt Hunsworth, from the Star Wars In Character podcast & The ArTmor Project

Our guest this week is Mr. Matt Hunsworth, from the Star Wars in Character podcast.  Not only is Matt a very funny podcaster, but he is also the driving force behind The Artmor Project.  This project has talented artists paint and craft on a set of Boba Fett armor chest plates, which are then sold at auction to raise money for Toys for Tots.  In their second year, the Artmor Project is growing, and this years auction is just around the corner.  Please see Matt's links below to learn how you can participate in this great event!

Not only do we talk to Matt about his podcast, and The Artmor Project, Matt also wows us by doing something that no other Expanded Fandomverse guest has done before!

Also in this weeks show, we discuss the news, but find there isn't much to talk about, because everyone is still too busy watching The Force Awakens trailer.  And we give away our Christmas stockings when we pull a winner from the hat in this round of Jason's Jawa Giveaway! (Utini!)

Posted by TheExpandedFandomverse at 6:22 AM No comments: