Jason on the My Star Wars Story Podcast!

Our good Buddy Scott Ryfun who does the Radio Drama Retrospective with us, has another podcast called My Star Wars Story. It's a podcast project dedicated to documenting the experiences of the Star Wars Generation. I was honored to be able to sit down with Scott last year and share my experiences and memories with him. I hope you'll come along for the ride and check out his other episodes! 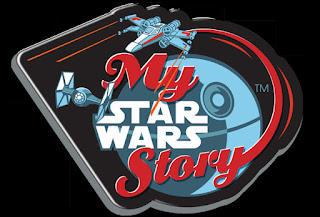 Click on the link below to hear my Star Wars  Story!
http://mystarwarsstory.libsyn.com/episode-19-jason-collier

Posted by TheExpandedFandomverse at 7:42 PM No comments:

EPISODE 047 - Would you pay to talk to someone about Star Wars...& "the other" Yoda spoke of was his purple twin.

It's a rather zany episode of the podcast this week. Jason is about to go on Vacation with his daughter Reese to Disney World, but wanted to get a show out before he left. Jason answers a solicitation on the web page Fiverr.com and pays some random guy $5 to talk Star Wars with him for 30 min. it actually turned out to be a very interesting conversation.

In the 2nd half of the show we play an outtake from the Radio Drama Retrospective where Scott Ryfun goes back to the 1980's rumor mill and talks about the speculation that "the other" Yoda spoke of was actually a bright purple colored, winged relative of Yoda, full of the Force. It's an interesting story for sure!
All this, Jason's daughter, Resse,guest hosts and we find out more about her toy Vlog.

Posted by TheExpandedFandomverse at 9:42 PM No comments: