Meet Jason's friend Bryan Wilson. He's a former ad exec who brought you the Star Wars M&M M-PIRE campaign and who has worked on ad campaigns with Lucasfilm and Michael Bay. Bryan has also invented a super cool/fun board game based on movies called Schmovie. Jason and Bryan play a round of Star Wars Schmovie, talk about the Magic of Myth Star Wars Smithsonian exhibition from 1999 they both visited, and talk about trading Star Wars toys for Transformers (travesty!)
There's even a chance for you to win your very own copy of Schmovie!

Tim joins Jason during the opening and close to discuss Force Awakens tickets, Star Wars movie marathons, and a sad farewell to one of our hosts. 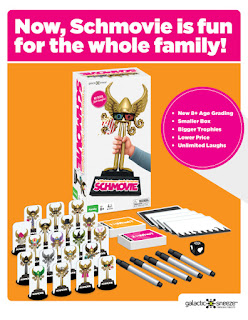 Posted by TheExpandedFandomverse at 11:51 AM