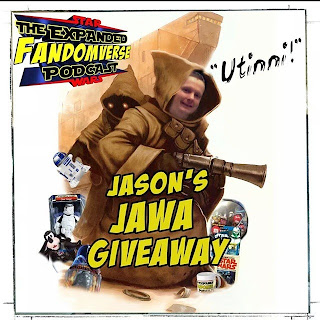 Notes: This Darth Vader figure was created especially forCelebration III to celebrate the release of the final episode in the Star Wars saga, Revenge of the Sith. This Exclusive Collectors Edition is limited to 50,000. James Earl Jones recorded lines of dialog exclusively for this figure.

We will then collect the names of all who entered, place them in a hat, and draw one lucky entry. Your name only goes in the hat once, no matter how many times you post or reply on our site. (But don't let that stop you from posting multiple times!) We will then contact the lucky winner by Facebook Messenger to get your shipping address. And don't worry, we will pay the cost of shipping for you! We're just that nice!

Contest open to any and all Facebook users except for... Tim and Jason, our families, previous show correspondents, and people who have won previous contests we've help in the last 6 months. (But since this is our first contest, you can ignore that part!

Posted by TheExpandedFandomverse at 11:48 AM